Appropriate nutrition is one of the fundamentals for a successful breeding programme and the Chestnut Horse Feeds range can help to support your mare and foals health and wellbeing while keep feeding simple and effective.

The nutritional requirements of a broodmare changes over the course of their 11-month pregnancy, whilst they are lactating and after foaling down.

During the first eight month’s of the mare’s pregnancy, there is little foetal growth and so mares in ‘good’ condition don’t have a higher nutrient requirement than any other adult horse at maintenance.  The foetus does the majority of its growing during the last three months of pregnancy and this is when the mare’s nutrient requirements will increase.

During the last three months of pregnancy, the growth of the foetus increases the mare’s nutrient requirements by up to 20%.  At the same time, the mare’s capacity to eat large quantities is reduced as the foal develops and starts to occupy a large proportion of the mare’s abdominal cavity.  As capacity declines, and nutrient requirements increase and so consideration should be given to feeding quality not quantity.

The mare’s condition needs to be monitored closely during this time and ideally; she should remain in ‘good’ condition but not ‘fat’.

Ultimately, the time of year will dictate any feeding regime. For mares foaling in the summer months, good spring grass is the ideal feed in late pregnancy together with ad- lib forage (hay, haylage etc.) and a high quality concentrate feed, Chestnut Active Response is a great option. For those foaling on poor quality pasture or in later months more nutrient dense forage sources such as alfalfa or haylage alongside a soluble fibre feed, such as Chestnut unmolassed sugar beet flakes and Chestnut Active Response.

As a general rule, most mares on forage of an average quality will require a concentrate feed, at a ratio of approximately 20% of their diet during months 9 and 10, rising to 30% of their diet for the final month of pregnancy.

Above all, the diet should be balanced – delivering suitable levels of energy, protein and also, vitamin and minerals. Chestnut Active Response is a complete feed, providing appropriate energy levels and includes broad-spectrum vitamins and minerals to help keep feeding simple.

A mare’s nutrient requirements are at their highest during lactation, whilst her energy requirements double at this time.  Mares will produce approximately 3 – 4% of their bodyweight per day in milk during the first 12 weeks of lactation.  During this early stage, the mare’s metabolism will produce milk at any cost and any reduction in feed energy intake below required levels will mean that she will lose condition.

The same as during pregnancy, the time of year will affect the feeding regime. Mares foaling early in the year will require a good amount of concentrate feed in order to meet the significantly increased requirements for milk production. Good quality forage, such as alfalfa hay or haylage together with an appropriate feed ration such as Chestnut unmolassed sugar beet flakes and Chestnut Active Response.

Mares foaling in the summer months can benefit from the high quality of grazing available and will therefore require less concentrate feed. A good guideline for feeding at this time is to provide a total feed supply of 2.5% of the mare’s bodyweight per day.

Not only has the mares nutritional requirements changed during pregnancy and lactation there is also an increased requirement for water  and a supply of clean, fresh water is essential. 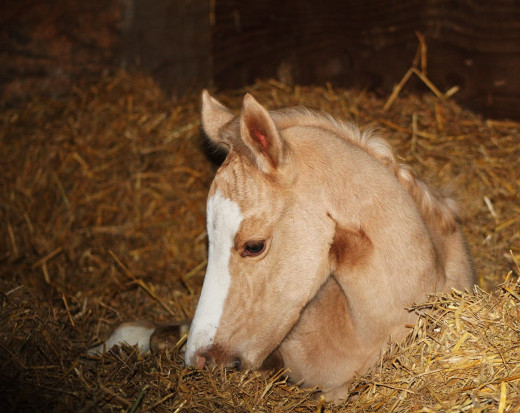 Newborn foals should be suckling within 2 hours of birth with many taking their first drink within half an hour to an hour. Colostrum, the so-called, ‘first milk’ from the mare contains all the essential anti-bodies necessary for the foal to be able to develop a healthy immune system in order to fight disease.  The foal loses its ability to absorb these immunoglobulins within a few hours of birth, so this initial intake is essential.

Foals grow rapidly during the first three months of their lives with energy requirements being approximately 3.5 times greater than that of an adult horse for maintenance.  Most foals start to nibble at their mother’s feed and forage at around 10 – 21 days old.  ‘Creep’ feeds can be fed from this point onwards, until the foal is 8 – 9 months old. Chestnut Active Response is ideal to be used as a creep feed in the appropriate quantities.

The purpose of a creep feed is to help the gastro-intestinal tract adjust to ‘hard feed’ prior to weaning, and help to ensure that there is no interruption to growth rates.  It is important, that foals consume some concentrate feeds while still nursing as studies have shown that foals who do not, are more at risk of developing orthopedic disorders after weaning (Cuddeford, 2003).  However, supplementary creep feeds (such as Chestnut Active Response) should be restricted in quantity to 500 – 750 g per 100 kg bodyweight per day.  Such a restriction will help to avoid incidences of growth-associated ailments such as contracted tendons (Frape, 2004).  Ultimately, forage adaption is more important than hard feed, as forage should form the basis of future feed rations.

All images courtesy of Sian Drake at MiiPally Stud

From Six Months to Two Years

The most important factor for feeding youngstock is regular monitoring and adaptation to the feeding regime.  Growth is a dynamic process that varies with the individual, factors such as breed, season and forage quality will all have effects.  Steady growth rates are key to long term health and wellbeing.

The rate of growth of bone and muscle (and hence, requirement for protein) is most rapid in the foal, and gradually slows down as the foal reaches maturity.  The quality of the protein fed to youngsters is important, especially, the amino acid, lysine, which is frequently lacking in youngsters diets.  Thoroughbred youngsters have a lysine requirement of 4.5g lysine per kg of total diet. (Pilliner, 1999).

After 2 years, the growing horse’s nutrient requirements are similar to those of a mature adult and feed should be given dependent on workload, temperament, management and breed.

If you have a brood mare, foal or youngster you would like further feeding advice on, we are here to help. Please complete our online form in as much detail as possible and we will be in touch.

The small team at Chestnut Horse Feeds are dedicated to providing high quality nutrition, while keeping feeding simple and will always have your horses’ health and well being at the forefront of what we do.